It would be fair to say that everyone in Delvin knew all about it when Body & Soul rolled in to town last Friday.

At one point, our normally free flowing roads came to a complete standstill as thousands of revellers converged on Ballinlough for this (sold out) epic three day celebration of the summer solstice, set on the magnificent castle estate.

With an eclectic line up of musical acts, DJs, story tellers, poets, comedians, quirky forest treats and the art installations that are part and parcel of Body & Soul; it was perhaps unsurprising that so many patiently queued in the traffic and waited for up to 3 hours (according to one source) just to get in – albeit at the expense of the locals who just wanted to get home!

Every incarnation of festival goer was represented from the soul kids to the flower people, the drunk but (mainly) friendly teenagers, the self consciously cool students and the swathes of well to do professionals “blending in” with their flowery shirts and flip flops. 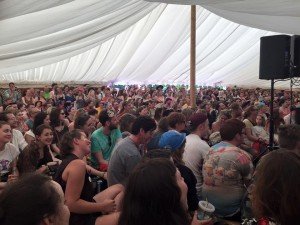 Body & Soul fully utilises the rolling landscape at Ballinlough. A natural amphitheatre provides a perfect setting for the main stage – an ideal platform for the surprisingly effective meditation on Saturday morning and for getting great views of the acts which included GOAT, Super Furry Animals and Flight Facilities by night. Cross the bridge and you were in the realm of the party people – the midnight circus arena with its fairground rides, cocktail lounge, thumping dance tent and ripe portaloos. Turn left and you had the wooded areas with makeshift clubs, restful lounges and creative surprises among the trees; while the sunny walled gardens were decked out with hammocks, a fire pit, stalls and the ever popular Wanderlust stage in pride of place.

Making its début at the 2015 festival was the Vodafone Comedy tent which featured Jason Byne, Andrew Maxwell and the excellent Dublin Comedy Improv troupe to name but a few. For my own part, I did feel sorry for Eleanor Tiernan who took to the stage following an address by national f*cking treasure Panti, after which the tent immediately cleared. (It was nothing personal Eleanor.) 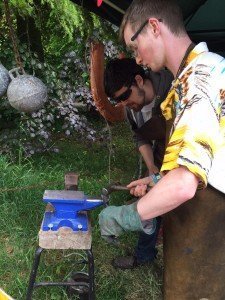 Holistic therapies, workshops and hands on craft demonstrations have also played a major role in the success of this festival. Basket making, wood and stone carving and even forging were some of the offerings available this year to those wanting to try their hand at traditional crafts. Others donning dressing gowns and suspiciously relaxed expressions passed through the crowds after their massages, spa treatments and hot tub experiences.

As I navigated my own way off site on Saturday night, dodging groups of happy but very drunk youngsters and feeling a little disappointed that I would not see some of the acts still lined up for later on in the night, I quickly copped on when surrounded by the banks of tents that so many would be calling “home” for the weekend. B&S takes good care of its campers, but even with “boutique”, “quiet” and “family” camping options available, the enormous, tightly spaced clusters of tents would do nothing to persuade this thirty something to try out the full festival experience next year.

I instead returned home to my own bed to reflect on a great day out and to look forward to Body & Soul 2016 in comfort and listening to the distant thump of the ongoing party still taking place down the road.


Note to local media – please do not any aspect of this article without my express consent. That includes you Larry!

Feel free to email your own photos to festival@delvinvillage.com!