Tierney’s Store – The End Of An Era 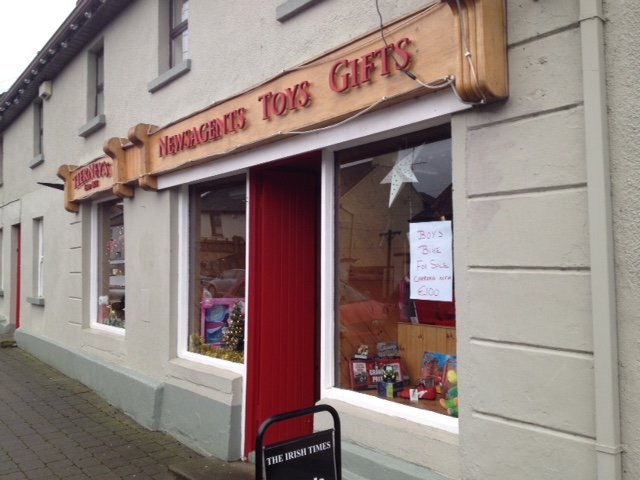 On Wednesday 31st December 2014, the people of Delvin paid a fond farewell to Tierney’s Shop as the doors closed following 140 years of trade.

Since posting the announcement on Facebook, messages have been coming in from all over the world from people sharing their memories of this landmark local store and wishing Yvonne and David well.

Michael Leonard kindly shared some of his own memories of the store that he himself visited as a child when Tierney’s was a busy grocery. The smell of the old paraffin heater that Mrs Tierney had in the store and the occasional sight of a pheasant hanging behind the counter from one of Jody’s expeditions were among many of the characteristics that were a recognisable feature of the store.

Many will fondly recall the drawer in which Mrs Tierney kept the comics and the excitement of children as they received their copy of the Beano or Dandy with their name pencilled on the top – not to mention the sweet jars that were another attraction to younger folk. Queuing outside the store for newspapers after Sunday mass was a weekly ritual that many will remember from before the days of Internet news services! Michael himself continued the tradition of buying his own Sunday papers at Tierney’s, despite his mentor having another store in the village before he himself went on to open his own shop.

Sadly, the appearance of larger stores and increased local competition meant that the reign of Tierneys would come to an end. We wish Yvonne and David every best wish as they pursue the other projects that they are involved in.

Best of luck Yvonne. Great memories of Tierney’s and the Sunday rush for papers after mass and the chat when you’d call in for supplies during the week. Sad.

Best wishes Yvonne and David. Saw one of the posts that the shop opened in 1872. I’m sure there have been some stories through the doors. Good luck. Marea Tierney xx

So sad to hear it!! Delvin won’t be the same without Tierney’s. Best wishes to Yvonne and Her Family.