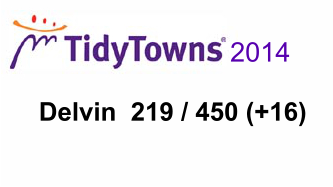 The results of the 2014 National Tidy Towns Competition were announced at the Helix in Dublin earlier this afternoon and we offer our congratulations to Kilkenny – winner of the prestigious title of Ireland’s Tidiest Town!

In all there were 849 entries to this year’s competition.

The Adjudicator’s Report In Full 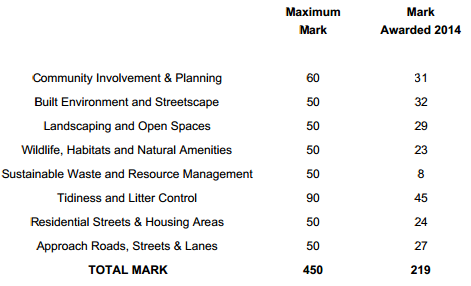 Community Involvement & Planning / Rannpháirtíocht an Phobail & Pleanáil:
Delvin is welcome to the 2014 National Tidy Towns Competition; thank you for your submission. Your map was quite clear and had the major landmarks marked in however the list of projects you included should have been enumerated in your application form and the numbers and locations featured on the map, this is a basic requirement with your application. It is also necessary to send in a plan summary of the projects you wish to complete over the next 3 year period at least.

At 8 members the committee is probably a little bit small for a centre the size of Delvin, however perhaps that depends on the numbers of volunteers you can count upon on a per project basis. We note you work quite closely with Westmeath County Council, An Taisce and the housing department of Westmeath County Council also; some thought should be given to broadening your links and including sporting organisations, farming community, business community and others.

It is good to note that Delvin has its own website and perhaps other digital media can be explored such as Facebook, Twitter and others as these can be quite helpful in spreading the word. With 3 years experience under your belt you are just leaving the new-entry stage and already the benefits can be seen in the appearance of the village and, no doubt, in the strengthening of community spirit, well done to the committee. The interpretive panel within the village is informative, however it looks a little weather-stained and some thought should be given to improving its presentation.

Built Environment and Streetscape / An Timpeallacht Thógtha agus Sráid-dreacha:
Perhaps the first thing noticed by the travelling public on entering Delvin is the negative visual impact of the overhead wirescape which spoils the positive elements of the built environment, particularly in relation to heritage buildings marking the entrance. It was a pleasure to note the number of attractive shopfronts and window displays even though adjudication took place outside of business hours, the properties in question included Tierney’s Newsagents, Fairytale Brides and Accessories. The Michael Glinner premises features roller shutters to the outside of the window which have a negative visual impact on the streetscape, these can be placed inside the window thus allowing an attractive window display outside of business hours. The church and its grounds are impeccable and the Garda station is quite neat also. The Delvin Handball Club looks well too. The roadside area to the Kenny’s shop looks quite bad with its enormous sign on the footpath, its 4 other signs, an ice-cream cone, 2 coffee signs and a Hot Food sign as well as balloons, all of which create dreadful visual clutter and detract from an attractive streetscape. Undoubtedly Delvin’s castles have a significant positive impact on the townscape which should be reinforced by other buildings within the town.

Landscaping and Open Spaces / Tírdhreachú agus Spásanna Oscailte:
Grassed verges on approach roads to Delvin are being maintained to a nice standard flower tubs are numerous and all are well planted. The green lay-by area on the Navan road enjoys good maintenance also, it is however quite large, perhaps it could feature picnic facilities and some landscaping, the grass bank on the opposite side of the road might also be landscaped. The crossroads area is beautiful with a lovely landscaped green area featuring seating and a picnic area. A green verge along here could have been better maintained (towards the town). Landscaping has been noted around the perimeter of the Youth Reach premises however the roadside boundary appeared quite weedy. A number of flower poles along the Main Street were minus their hanging baskets. The Livestock Mart on the Kells road features a tidy curtilage area, a little bit of planting either inside or outside its roadside boundary wall would soften the visual impact here and the boundary wall itself could be refurbished. The decision to install timber square barrels and fill these with floral displays rather than hanging baskets is noted. In all future planting bear in mind the desirability of choosing native species that will enhance biodiversity.

Wildlife, Habitats and Natural Amenities / Fiadhúlra, Gnáthóga agus Taitneamhachtaí Nádúrtha:
The small playground at the church car park is an attractive feature. The burial grounds are neatly presented and feature an attractive roadside stone boundary wall. Delvin Castle Golf Course looks quite beautiful also from the roadside and has a good visual impact on the townscape. The wildlife reserve on the Athboy road is noted; your adjudicator did not see any swans or beavers and you rightly say that the area is best preserved without people gaining entry however perhaps a wildlife interpretive panel detailing the wildlife of your lovely town could be placed at strategic locations within the town centre so that your wildlife can be understood, promoted and appreciated. Other projects which might be suitable include a bird survey, tree trail, a nature trail and others. This could also be carried out in conjunction with school children for their project work.

Sustainable Waste and Resource Management / Bainistiú Acmhainní agus Dramhaíola Inbhuanaithe:
The recycling point/clothes bank at the Livestock Mart looked very neglected, having no neighbouring containers or other features like interpretive panel on recycling or indeed landscaping around it. We note from your application the bottle bank at the Delvin Service Station and clothes banks at some other locations. Other initiatives such as the bric-a-brac and second-hand shop are good also, however more significantly the Green Flag status of the school makes a major contribution under this heading. For further ideas on preventing waste at source check out the following website – http://localprevention.ie/tidy-towns/ – and consult your Tidy Towns Handbook.

Tidiness and Litter Control / Slachtmhaireacht agus Rialú Bruscair:
Weed-choked kerbs were noted along the entrance from the Mullingar road, kerbs on the Navan road were badly choked with weed growth also. We note your representations to the NRA to upgrade road and footpaths as this seems to be the source of the problem regarding weed growth in cracks in the pavement and kerbs; we also note your representations to the appropriate body regarding derelict sites and buildings and we wish you every success in both initiatives, what you are doing is a very important first step in having these problems resolved. Litter control was very good in the town a few scraps of litter were noted travelling towards the centre from the Ballivor road and a scattering outside of the Handball Club. We note a vacant premises that had been neatly boarded up to its window and door apertures and looks well. Litter bins are not that attractive their tops look quite jaded looking so maybe these could be improved upon. Your Monday evening litter pick-ups appear to be successful as is your idea to request people to Adopt a Patch and it is encouraging to note that you have seen the benefit of this already. The dissemination of the litter dumping hotline details is excellent.

Residential Streets & Housing Areas / Sráideanna Cónaithe & Ceantair Tithíochta:
Residential estates look well and the Lacora Glen estate was particularly admired, Castle View looked well also and of course Stonyford Park is a most attractive development. Some roadside boundary walls need refurbishment by either cleaning, painting or repairs, some are noted on the Ballivor road and almost all boundary roads at the top of the Castlepollard road are in need of attention in this respect. The same might also be said of the Caislean development at the top of the Navan road together with some walls beyond the Livestock Mart. In most instances on-street residential properties looked very well. All residential developments should have identification signs. There is a need to bring home the message to people that their boundary walls and the areas immediately outside of these are every bit as important as their gardens and curtilage areas in general in terms of the Tidy Towns Competition.

Approach Roads, Streets & Lanes / Bóithre Isteach, Sráideanna & Lánaí:
We acknowledge your representations to the NRA regarding the quality of road and footpath surfaces; road surfaces and markings on the entrance from the Mullingar road looked reasonably well and grassed verges along the Ballivor road enjoyed good maintenance. Footpaths throughout the town varied in their standing of presentation as indeed did grass verges of other approach roads ie the Castlepollard road, the Navan road and others. Nameplates in most instances were nicely presented and the entrance from the Kells road looked particularly well with the verges on one side of the road left natural and backed by a flowering hedgerow while the other side of the road featured some nicely presented dwellings. Flower displays at nameplates were colourful and make a pleasant statement about the town. Car parking throughout the town is orderly, particularly along the main street with its well marked out spaces and, with the exception of the litter bins noted above, street furniture in general looked quite well. Your adjudicator appreciates the difficulties caused by traffic when Tidy Towns teams are out maintaining road, it is even difficult to adjudicate when traffic does not slow down.