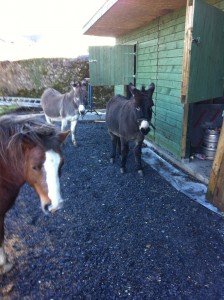 Their temporary home next to the Caman Inn may well have a “Sale Agreed” sign up, but fear not! Seamus & Bartley – Delvin’s resident Donkeys – will not be going far. In fact, they will shortly be moving to luxurious new accommodation behind Barry’s Pharmacy!

For anyone who isn’t familiar with their story, Seamus and Bartley and their young pony pal, Mighty Mouse, didn’t have a good start in life at all. These gentle and friendly characters were cruelly treated by their previous owners and lived in vile conditions until they were rescued and nursed back to full health by the team at Hungry Horse Outside – a small equine rescue centre based in County Longford.

Since being adopted by Sean Barry and Dennis Murtagh, Delvin’s newest residents have come to realise what it is like to be treated properly and to have a real home. Seamus and Bartley have been spoilt rotten by the locals and Mighty Mouse has also made a lot of new friends – he has even been known to give some of the smaller ones a ride around the site. That said, when he helped himself to a volunteer’s packed lunch recently, he might have soured one particular relationship!

With their temporary home now sold and winter setting in, Seamus, Bartley and Mighty Mouse will shortly be moving to their plush, new bachelor pad in the centre of the village. Three cosy stables have been constructed on land behind Barry’s Pharmacy and the finishing touches are being added to a special paddock which will allow them to roam safely and to greet their visitors.

Sean would like to thank volunteers, Joe and Michael Forde for their hard work on the project and says that offers of hay and other items would also be very welcome during the winter months!

About Hungry Horse Outside

Hungry Horse Outside is small rescue centre in County Longford. Although they mainly rescue horses, they have been known to take in cats, dogs and goats too. The centre relies on volunteers and any offers of help are gratefully accepted. With their help, the centre aims to re-home as many rescued animals as they can and to educate people on the responsibilities of equine care.