The hall was originally opened in 1832 as a chapel, and has served as the village hall since 1918. The building was extensively refurbished in Autumn 2009, and is now a modern, bright and welcoming community hub.

The President, who was accompanied by her husband, Dr Martin McAleese, was warmly welcomed by locals and visitors who packed the hall to help celebrate this very special occasion.

Eight groups who regularly use the facility were invited to prepare exhibitions for presentation to President McAleese during her visit. Each group rose to the challenge and put on a fine display of their photos, trophies and other memorabilia.

During her address, the President spoke of the importance of community spirit and said that Delvin was very fortunate to have so many people that are willing to take on projects and run groups for the benefit of others. She also spoke with a number of those attending the function during her visit. 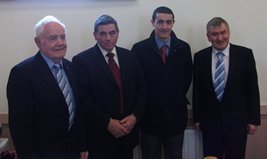 Attending the opening ceremony were TD for Meath West, Johnny Brady and councillors Dan McCarthy, John Shaw and Paddy Hill. Each paid special tribute to the hard work of the hall committee lead by Ursula King.

Dan McCarthy complimented the committee on the excellent refurbishment, and praised Westmeath Community Development for their contribution towards promoting community spirit.

John Shaw said that the project was a great example of local heroism and shows what can be achieved with commitment. Paddy Hill commented that the work was carried out in such a short space of time and that the committee was to be congratulated for their huge efforts.

Johnny Brady said that he himself used to attend dances in the hall years ago, and remarked that dance halls across the country are now laying idle and falling in to disrepair. He congratulated the committee on the fabulous refurbishment and again commended Westmeath Community Development for their role in the project.