Extension To Road Closure: “Not An Option” 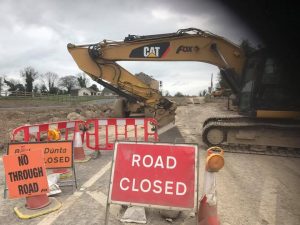 A report received earlier this week from a local business indicated that members of the work force currently on site between Cloughan and Killynon had indicated to them that there is an intention to seek a six week extension to the road closure currently in place, pushing back the opening of the N52 to the end of July. In response to this claim, I publicly raised the issue on Facebook to force a discussion on the progress of the works at the earliest opportunity.

In direct response to this, Aidan Davitt issued the following statement on Tuesday afternoon:

I talked to Westmeath engineer Ambrose Clarke 2 weeks ago about pace of work and last week there was a noticeable increase in activity. This morning I met Senior Engineer in Westmeath County Council John Ahearne on behalf of John Shaw, Robert Troy and Shane Cassells. Last week he met Foxs and they have a weekly plan and schedule in place. An Extension is not an option as per Westmeath county council and elected representatives. The weather is exceptional and the work is now being monitored weekly.

I have every reason to believe that my source was correct and that there was talk on site that an extension would be sought. I am pleased that Westmeath County Council and our elected representatives are now on record (for the first time I might add) stating that an extension is NOT an option.

Since the road closure took effect, I have received several complaints about inappropriate signage and in relation to near misses on roads that we all know are unsuitable for the volume of traffic using them at this point. Fortunately, there have been no serious accidents or injuries to date and I hope that this does not change over the remaining weeks that the planned closure will be in effect.

It goes without saying that the road improvements are necessary and that some inconvenience was unavoidable, but I make no apology for demanding that the works be carried out as quickly as possible and challenging what could be conceived as poor decision making and inefficient project management.

I would remind those that were critical of my decision to run this story on Monday that my focus is on the community of Delvin and (in case you hadn’t noticed) the business side of that community that has been hit HARD by this road closure. Your time and your energy would be better served supporting your community right now and making your own enquiries about the progress of the works rather than challenging or sniping at those that are putting their heads above the parapet on a matter that does affect all of us.