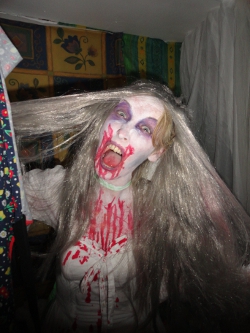 Last Sunday night (30/10) at Ballyhealy, locals and strangers alike were treated to a most terrifying night as they made their way around the walking track at the DSLC grounds.

Screams, screeches and blood curdling howls were the only sounds to be heard throughout the three hour ordeal. While it may seem that this was the place not to be, amazingly enough over 1,000 people felt otherwise as they waited their turn to face their worst nightmares. This was the DSLCs second time to host the Spook Trail and we are delighted to say that it was even more successful than the first with an extra 400 plus people coming through the gates.

This year’s event was on a bigger scale than that of last year, which of course required a great deal more work. 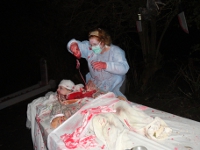 terrifying event. However it could not of taken place without the help of so many people with the community who not only helped to put it together on the day but also took the leading roles of the nightmarish characters that dotted the track.

The DSLC would love to thank sincerely all those that helped to make this such a memorable event.

Plans are already afoot for next year, which if the talk is anything to go by, will be an even more terrifying event.