Danger Money is coming to Delvin this February!

The St Patrick’s Hall Committee is pleased to announce that renowned actor, Seamus O’Rourke, will be taking to the venue’s stage for a night of theatre on Saturday 18th February.

Seamus will be performing “Danger Money” – “a beautiful ‘close-up’ of rural Irish life”, full of heartache and humour by playwright John McManus.

London was only ever meant to be a stepping stone for Teddy ‘the Mucker’ Tucker but somehow he stayed there for over thirty years until one day he abruptly abandoned his friends and his job and returned home to North Leitrim. He now finds himself in the bog wondering: Should snakes receive the Free Travel Pass? Are birds the souls of people that have passed on? What is that clown in number six smoking? Do we know what we don’t know? Why is he’s bagging turf when he doesn’t even have a fireplace…

Tickets are €15 each and are available from Michael Leonard. Why not give a friend or family a pair as a Christmas present?

Proceeds from the event will be used to purchase comfortable new seating for the hall and will empower them to offer further theatrical and musical events in the future.

John McManus is from Ballyconnell in County Cavan. His radio plays, No Hate Going to Loss and Will You Swap Knees with Me? Both won RTE P.J. O’Connor Awards. His first stage play, A Lock of Fierce Roars, received a staged reading by Druid Theatre Company. The Quare Land was first produced by Decadent Theatre Company at the Galway Arts Festival in 2010 and toured Ireland in a new production directed by and starring Seamus O’Rourke in 2013. It was then produced in New York at the Irish Repertory Theatre in 2015 as part of the Origin First Irish Festival where it won the Best Playwright Award. John completed the New Playwright’s Programme at the Abbey Theatre, Dublin, in 2014. He has had readings of other new plays at theatres in Cavan, Galway, Dublin, Canada and America. 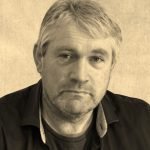 Seamus O’Rourke continues his crusade of bringing rural Irish stories and characters to the audiences of Ireland. His short stories and monologues are watched all over the world on social media and his plays, dig, Down, The Trappe Family, Ride On, Stalemate and Victor’s Dung have giving us a mixture of fun and sadness over the years, but it is his One-Man shows, The Sand Park, Padraig Potts’ Guide to Walking and Indigestion that have brought him to new heights in the theatre world and it’s with great relish that he takes on the role of Teddy ‘the Mucker’ Tucker as he comes to terms with his lot. Visit Official Website