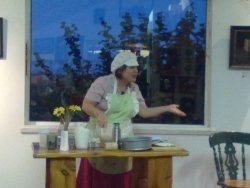 With the added bonus of a clear autumn evening, crowds packed in to the gallery over the course of the four hour event. The mosaic workshop was a huge hit with plenty of budding artists rolling up their sleeves and having a go at making their own pieces with help and guidance from renowned artist and designer, Dawn Aston. Inside the gallery, visitors took in new works by Mullingar based artist Kevin Meehan and caricaturist Niall O’Loughlin, while Delvin’s own Mary McEvoy delighted her audience with a hilarious and often touching performance of Alice Barry’s “Fruit Cake”.

Acclaimed local artist, Hazel Revington Cross, also unveiled her latest exhibition. Simply entitled “Larry”, it is a haunting and deeply personal collection of works inspired by the devastation caused in the lives of soldiers who were prescribed a contentious anti-malaria drug called Lariam. The launch included an emotional short talk by Dave O’Shea – a former soldier and campaigner who’s life has been dramatically affected as a result of taking the drug.

The Garden Gallery is open Tuesday to Saturday from 10am until 6pm.