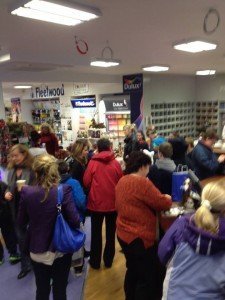 Congratulations to John and the team at McCormack’s Stores following their hugely successful breakfast morning and promotion day, held at the Store on Friday 21st November!

The store underwent a major refurbishment during the first half of the year and not a single thing in the shop has been left unchanged. A number of reps were in store during the morning to talk to customers, while David Smyth Catering kept others refreshed with free breakfast rolls and gallons of coffee.

Aslan – the legendary Dulux Dog – made an appearance in the afternoon and the store was filled with children queuing up to have their photo taken with him.

Remember that McCormacks now have everything you need to prepare your home for Christmas, with trees, lights and decorations and of course stoves, heaters and plenty of deals on heating fuels to keep you warm.