September 5, 2011
The results of the 2011 National Tidy Towns Competition were announced at a special ceremony held in Dublin on Monday 5th September. With the subsequent release of the local reports, it can now be revealed that Delvin has been awarded 180 points out of a possible 400 in this year’s competition. Sadly, this means that out of 35 entrants in Westmeath, Delvin came last!

The overall winner of this year's competition (congratulations to Killarney) scored 310 out of 400.

At first glance our result may be considered disappointing, but it is important to note that the village had not entered the competition since 2004 and that this year’s campaign came together at very short notice. In fact, a number of projects had not even commenced at the time of the assessment in June. Read more... Read more
Read more

September 5, 2011
I am delighted to report the setting up of Venture Scouts in Delvin. This group is for those aged between fifteen and eighteen years. The new group is headed by Laura O’Neill and she has already set the Venture’s their first task.

The group started training last week for the challenge of climbing Ireland’s highest mountain. The group will set out on the 7th of October with Venture Scouts from all over Westmeath to climb Carrauntoohil - a height of 1039 meters. The group have a tough month ahead of them as they intend to climb a number of mountains in different areas of Ireland in preparation for the climb.

Welcome To Our New Beavers!

Last Friday night was a very special night for Delvin’s Beavers as some of our Beavers moved to the Cub section. What made the night extra special was the fact that we brought in ten new Beavers into the section. This is a very important time for the Delvin Scout group as this was the first time we have had a transition between Beavers, Cubs and Scouts. It is equally as important for the individuals moving between the groups as they will be faced with new challenges in the coming years.

Although Beaver leaders were sad when saying goodbye to those Beavers moving up to Cubs we were equally delighted to welcome the new Beavers to the section and we hope they will get the same fun out of the group as we have over the last couple of years.

September 4, 2011
Following months of hard work by the Delvin Tidy Towns Committee and a small army of residents throughout the village, the results of this year's national competition will be announced in Dublin on Monday 5th September.

Delvin had not entered the competition since 2004, and you can read the judge's report from that year here.

Fingers crossed that Delvin's return to the competition will receive a good response and lead to greater things for the village in 2012! A special Nationwide programme about TidyTowns will be broadcast on RTE One at 7pm on Monday. Read more
Read more

September 2, 2011
This is a quick reminder that valuables should not be left on show in parked cars. Sadly there have been a few cases recently where cars have been broken in to and items stolen in broad daylight - even when the vehicle has just been left for a few moments. Always lock your car and keep items either with you or hidden away out of sight.

August 31, 2011
More than €300 in cash and jewellery worth €1,700 were stolen from a house in rural Delvin on the 25th August. The burglary took place some time between 5.30pm and 6.30pm. Intruders entered the house after forcing the front room window with a screwdriver. Other valuables including a television and a laptop were not touched.

Anyone with any information about this incident is asked to contact local Garda. In addition, local people are again reminded of the need to be more aware of suspicious activity in the area. For information about Delvin Community Alert, please click here. Read more
Read more

August 29, 2011
To celebrate this event members of the Delvin Historical Society along with friends and visitors from Holland met at Lough Lene for their walk to Fore Abbey. Read more... Read more
Read more

Could You Spare A Few Hours To Help Delvin Tidy Towns?

August 23, 2011
Delvin Tidy Towns are looking for volunteers to help out with the on-going clear up at St. Mary’s Church.

Anyone that has passed this landmark in recent weeks will have noticed the huge amount of work that has already been done, but there is plenty more still to do and extra help would be appreciated! If you would be willing and able to give up a few hours per week to help them continue this worthwhile project, please contact Eamonn on 044 966 4658. Thank you. Read more
Read more

Robbery In Mulliganstown – Did YOU See Anything?

August 19, 2011
On Thursday August 11th, thieves entered a house in Mulliganstown, Delvin and threatened the occupant with a knife before making off with a small amount of cash. The robbery happened sometime between 16:15 and 16:45 and the thieves made their getaway in what was believed to be either a white Citroen Berlingo van or a white Peugot Partner van.

Anyone who believes that they may have information which could help identify those responsible is asked to contact Mullingar Garda on 044 938 4000. Read more
Read more

Big Clean Up Under Way At St Mary’s Church 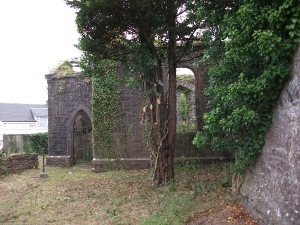 If you go down to St Mary’s Church today, you are in for a big surprise!

Thanks to a phenomenal effort being put in by volunteers from Delvin Tidy Towns and with support from Westmeath County Council, the grounds surrounding this important local landmark are finally being cleared so that everyone can explore and appreciate the ruin and the graveyard surrounding it.

Given the size of the plot and the condition of the land, the work is being done in sections and will take a while to complete. It is hoped that the land will be maintained once the initial clear up is complete. Volunteers are of course welcome to join in with the cleanup! View the photos... Read more
Read more
This website uses cookies to enhance your browsing experience. Cookies cannot be used to identify you. By continuing to use this website, you confirm that you are happy with this. ContinueRead more