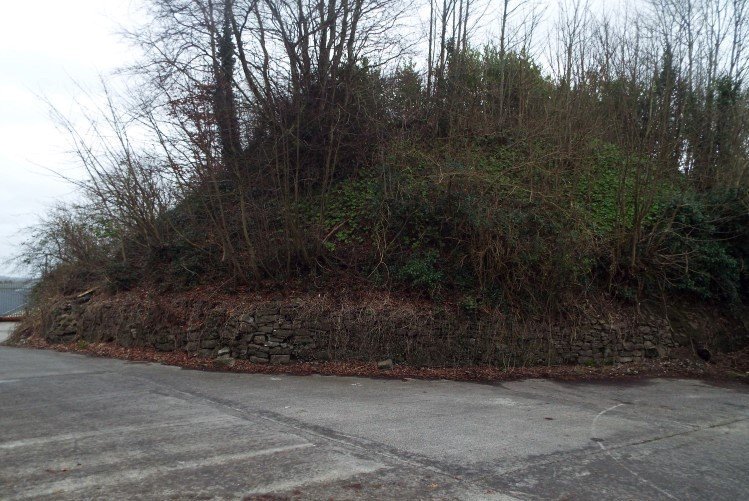 Sadly not accessible to the public but still very much "there" in McCormack's yard, is what remains of a late 12th century earth & timber motte castle, built by Hugh de Lacy.

In the late 12th century De Lacy, then Lord of Meath, granted the lands of Delvin belonging to the O'Finellan's to his brother-in-law, Gilbert de Nugent. It has been suggested that this Anglo-Norman earth & timber castle was constructed on top of an earlier Gaelic fortification called Telach Caíl.

The structure was described in 1973 as ‘a fairly large circular motte. The sides are very steep and the top is fairly wide and flat.' There are said to be wide views of the surrounding countryside from the top.

Located a short distance from the Motte, is a souterrain which was discovered in 1999 during the construction of a housing estate. A survey revealed the following:

‘The souterrain consisted of a passage with two levels which terminated in a beehive shaped chamber.

The passage (level one): This passage which was entered from the south, curved eastwards towards a drophole that provided access to a lower level (Level Two). The passage measured 3.2m in length and 0.85m in maximum width and 0.6m in minimum width. It had an average internal height from floor to roof lintel of 1m, but as it extended southwards towards the entrance it decreased to a height of 0.65m. The floor of the passage consisted of an orange coloured sandy clay with occasional patches of charcoal and some animal bone. The walls of the passage were constructed of reasonably regular roughly cut greywacke blocks.

The passage (level two): Level two consisted of a roughly north-south passage of 2.75m in length. It had an average width of 0.65m except at the southern end where it measured 0.75m below the drophole. It had an internal height from floor to roof lintel of 0.8/0.9m. The walls of level two were of similar construction to level one.

Chamber: The chamber which was located at the northern end of the passage was accessed via level two. It was a beehive chamber constructed of dry stone with a corbelled roof.'