Castletowndelvin (now known as Delvin) was one of the new Poor Law Unions created in Ireland between 1848 and 1850.

The Guardians met each week on Fridays at noon.

The new Castletowndelvin Union workhouse was erected in 1850-52 on a 12-acre site half a mile to the south-east of Castletowndelvin. Designed by the Poor Law Commissioners' architect George Wilkinson, the building was based on one of his standard designs to accommodate 400 inmates. Its construction cost £5,200 plus £885 for fittings etc.

The workhouse had two long blocks at the front linked by a central entrance archway. To the rear was a T-shaped block with the central chapel running towards the entrance.

The workhouse buildings were demolished in the 1920s and the site is now occupied by housing. 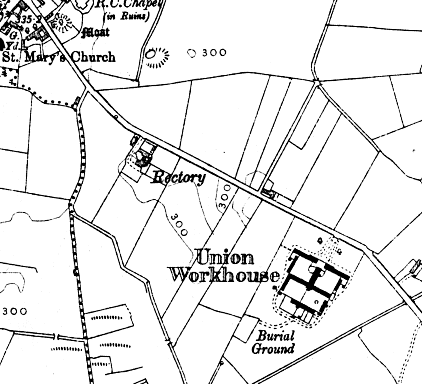