The Murder of Howard Fetherstonhaugh 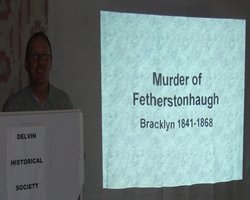 Congratulations to Michael Murphy who gave an excellent presentation on the Murder of Howard Fetherstonhaugh, to a full house at Carmel Gaffney’s on Thursday 15th September.

The presentation was the first of several events that have been planned by the Delvin Historical Society for the coming winter months.

Summary Of The Lecture By Paul Hughes
Fetherstonhaugh was a magistrate and a substantial landowner, his main property being that of Bracklyn estate outside Delvin.

The lecture touched briefly on the family and its origins in Ireland, and then concentrated on life in Delvin and Bracklyn during the Great Famine. It was felt that this was an important area to look at as it was during this period that animosity from the local population, began to build in earnest against the Fetherstonhaughs.

Another area which was looked at, and one of equal importance to that of the Famine, was the post-Famine period. During this period, Fetherstonhaugh changed the direction of farming on the Bracklyn estate. This change in direction brought new problems to the local community as consolidation of land meant the loss of land and livelihood to many families living on the estate.

What is more interesting about this period is the fact that much of what was happening in the 1860s is not a million miles away from what is happening today. Pre-Famine Ireland saw the landlords make more money, and as a result able to access greater amounts of credit. This credit was used to acquire more land, which due to demand became more expensive. Loans were also spent on the landlords’ big houses, lavish gardens and follies of various degrees.

Alas, just as today’s burst, in the case of 1845, the proverbial pin was that of the Famine. Cottiers, labourers and tenants concerns had changed dramatically to that of feeding their families instead of feeding the landlord his rent. With no income, mortgages went into arrears and the banks called in their loans.

Howard’s father was clever during this period, and managed to stay clear of the lavish lifestyle. Thus when Howard took over he was in a position to get on with running the estate. This meant that things had to change and by 1868 Howard pursued a policy of land consolidation. One way of doing this was to raise rents, thereby forcing existing tenants off the land.

This tactic worked, as by the early 1860s, land records showed that only nine percent of land on the Bracklyn estate was occupied through rental agreements.

The local community had by now become restless and in April 1868 Howard met his death by the gun in the hands of an assassin or assassins working under the name of “Rory of the Hill”. Following a lengthy investigation, which led to six arrests, nobody was or has ever been charged for, as Hannah Fitzsimons named it, “The Evictor’s Death”.