The results of the 2011 National Tidy Towns Competition were announced at a special ceremony held in Dublin on Monday 5th September. With the subsequent release of the local reports, it can now be revealed that Delvin has been awarded 180 points out of a possible 400 in this year’s competition. Sadly, this means that out of 35 entrants in Westmeath, Delvin came last!

The overall winner of this year’s competition (congratulations to Killarney) scored 310 out of 400.

At first glance our result may be considered disappointing, but it is important to note that the village had not entered the competition since 2004 and that this year’s campaign came together at very short notice. In fact, a number of projects had not even commenced at the time of the assessment in June. 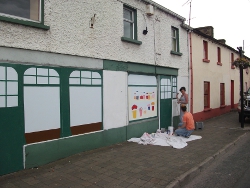 Since the judge’s visit, empty shop units referred to in the report have been boarded up and decorated with murals courtesy of a local artist. Youthreach have been busy converting two more empty shop units in to new teaching spaces, and the largest of this year’s projects – the clear up at St Marys church – is also well under way.

The competition also looked at “green” matters and Delvin scored “nul points” in the category for Waste Minimisation which considers energy efficiency and other environmental practices. A potential 37 extra points were also lost in the category for Wildlife and Natural Amenities. Given that we are surrounded by countryside, it should be possible to gain some extra points here next year!

Other suggestions for improvement included provision of extra trees and litter bins throughout the village, replacement of old lampposts, planting of hedges and tidying up some general loose ends.

On a positive note, congratulations to Lenihan’s Butchers, The Blue Hackle, Lindsay Jordan and Yvonne Tierney, whose premises received special commendations – and to the Delvin Beaver Scouts for their planter in the village which also received praise.

It goes without saying that Delvin’s Tidy Town campaign will be more settled in 2012. Given that a number of our failings in this year’s competition are already in hand and that additional projects are already in the pipeline for next year, it really is all to play for.

The adjudicator’s report referred to Delvin as “a lovely town with some outstanding historic buildings and an enthusiastic community” – so let’s remember that and aim higher in 2012!