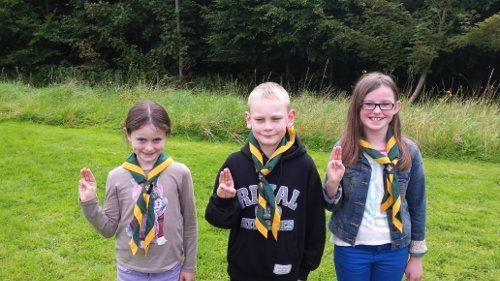 The 3rd Westmeath Delvin Scout Group held their AGM on Saturday 30th August. The event was held, thanks to Robert, Anne and Henry Ogle, at Ogles just outside Delvin.

As well as parents being informed of the year’s activities, a number of Beavers moved to the Cub section while Cubs moved up to the Scout section. As the AGM is an important date on the scouting calendar, it was fitting that a number of Beavers be invested and it was a great pleasure to welcome Darcy, Cody and Fiadh.

In addition to the AGM, parents and scouts were treated to a BBQ cooked up by the Delvin Ventures and live music courtesy of Brian and Killian who had travelled from Athlone Venture section.

Our next outing is on the 20th of September at 3pm when we will launch our new kayaks in the canal near Nanny Quinns. This event is open to all parents and the group leaders are hoping for a big turn out.